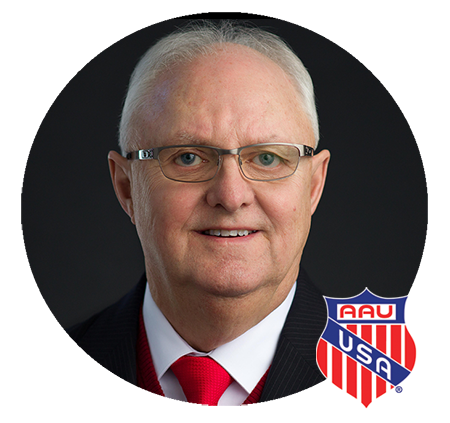 ORLANDO, Fla. – It is with great sadness that the AAU announces the passing of AAU President & CEO, Dr. Roger J. Goudy, on Saturday, November 28, 2020.  He had been admitted to the Cleveland Clinic in Ohio and was surrounded by family and close friends.

As President & CEO of the Amateur Athletic Union (AAU), the longest-tenured youth sports organization in the world, and Madison County Schools Superintendent (2008-2014), Dr. Roger J. Goudy dedicated his life to serving youth through sports and education.  Actively involved in amateur sports for the last 40 years, he was AAU National Secretary (1994-2014) before becoming President/CEO in 2014.

“My vision for youth sports is simple,” said Dr. Roger J. Goudy, President/CEO of the AAU. “To raise tomorrow’s leaders on today’s playing surfaces.  No matter age, background, ethnicity, race, or skill level, there should always be an attainable path for participation in amateur sports for all.’

Since 1992, he served as AAU Volleyball National Chair, spearheading the growth of the largest volleyball tournament in the world, the AAU Junior National Volleyball Championships, at ESPN Wide World of Sports Complex and the Orange County Convention Center.  The marquee event for the number one sport in the AAU, the AAU Junior National Volleyball Championships attracted more than 2,800 teams and 45,000 participants from across the United States and the world in 2019, generating an economic impact of $101 million to the local economy.  It has won numerous awards, including SportsTravel’s Best Amateur Sports event in 2017, 2019.

Dr. Goudy served on the Board of Directors of Visit Orlando, the official tourism association for Orlando, the most visited destination in the United States drawing 75 million visitors annually to the Central Florida area which hosts offices in more than 64 countries world-wide.

Inducted into the AAU Hall of Fame in 1999 for dedication and service to America’s youth, Dr. Goudy also received numerous industry awards such as National Association of Sport Commission’s Sports Event Organizer of the Year (2017), Sports Events Magazine’s Sports Events Planners to Watch (2017, 2018) and was named one of Orlando Business Journal’s CEOs of the Year in 2018.

In 2019, the International School Sport Federation (ISF) elected Dr. Goudy as its Continental President of America. The ISF is recognized by the IOC to organize world championships for ages 13-18 years, including 119 countries.

“It is a tremendous honor and privilege to be chosen to this position,” said Dr. Roger J. Goudy, President/CEO of the AAU. “As a former school superintendent and longtime youth sports administrator, I look forward to sharing my vision for youth sports with this prestigious body and throughout the world.”

Leaning on his experience in education, Dr. Goudy established the AAU Cares program shortly after being elected president of the AAU in 2014. As the organization’s way of giving back to the many communities across the nation that host AAU events each year, AAU Cares strives to provide youth athletes lessons in learning, life and social responsibility. He had also been instrumental in support of the AAU Urban Initiative developed with AAU National Treasurer Jo Mirza in 2015 to provide participation opportunities to youth in under-served areas of the country.

“I believe that our volunteers and our organization have to be committed to bringing people together and working together for the good of all mankind,” said Dr. Roger J. Goudy, President/CEO of the AAU.“I have always said I think we can change the world through sport. I think we are.”

Dr. Goudy was a longtime Ohio resident and brought an estimated $40 million to Greater Cleveland as a member of the 1999 Cleveland AAU Junior Olympic Games Committee. He spent much of his career with the Madison Local School District in Ohio, most recently serving as the district’s Superintendent of School from 2008-14. He is a member of the Buckeye Association of School Administrators and serves on both the Ohio State Report Card Committee as well as the Ohio High School Athlete Association (OHSAA) Superintendents Committee for school sports.

For more than 40 years, Dr. Goudy served the AAU in various capacities at the local, district, and national level. These roles included coach, volunteer, mentor, leader, and most importantly, friend. We know the entirety of AAU membership joins us in expressing our heartfelt condolences and sorrow to the Goudy family. While he can never be replaced, Dr. Goudy will always be in our hearts.

“There are no words that can summarize how much Roger meant to his family, friends, and anyone who was lucky enough to spend time with him,” said the Goudy Family. “He loved the AAU organization, largely because of all the truly amazing and talented people that comprise it. We, his family, know that he would want nothing more than for everyone to continue doing the amazing work of providing participation opportunities for America’s youth. The family appreciates the support and kind words for Roger and we ask you respect our privacy as we mourn his passing during our time of grief.”

Due to the recent pandemic, the family will have a private gathering on Friday, December 4, 2020, at the Behm Family Funeral Home, 26 River Street, Madison, Ohio 44057. Flowers can be sent to this address.

A private service will stream live on the funeral home’s Facebook page here: www.facebook.com/BehmService at 2:00 pm on Saturday, December 5, 2020.

Online obituary and condolences may be viewed at www.behmfuneral.com.